I was invited to my first Arabic engagement party and wedding a few weeks ago! I’m so excited about being a part of her special days as she is a friend and I know that I will experience many new things. The woman is the sister of one of my students and her English is superb, which is very uncommon for the village where both my husband and I work. She has helped me greatly with my research regarding the village and in the process we have become friends. I called her one day to update her about our pregnancy and she informed me then that she had something she wanted to talk to me about. She came to the school during one of my breaks and shared her news with me.

The process of getting married is very different from that in the US. Here the women do not know their future husbands. They do, however, know of them as most of the women here marry their first cousins. When a man is interested in marrying a woman, he asks the father’s permission. If he comes from a good family and if the father of the potential bride wants his daughter to decide her future, then he will tell his daughter that a good man asked to marry her and she can decide yes or no. If the father is not as interested in his daughter’s opinion he can tell the gentleman yes or no and then tell the daughter what her future plans are. If the man is not honorable the father will usually say no before consolting with the daughter unless they need the finiacial relief of marrying their daughter off, in which case he will say yes.

In my friend’s case, her father and brother told her about the proposal and praised the gentleman for his character. Initially, she refused as he is younger than she is and she is still completing her studies to become a teacher. After speaking with her mother she changed her mind under the condition of her future husband allowing her to finish her studies now and persue a PhD.

After attending the events I will upload pictures (if I am allowed to take any)and jot my experiences. Until then, I am in search of a traditional engagement and wedding ceremony dress.

If you are interested in finding out more about Islamic/gulf culture from a westerner’s perspective, I recommend “Guests of the Sheik: An Ethnography of an Iraqi Village” by Elizabeth Warnock Fernea. While there are differences between an Iraqi village and an Emirati village the book does give great insight to living in a Middle Eastern country. 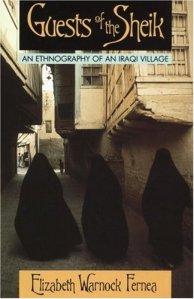 Because sometimes you want to talk about more than baby poop.